One Of Kelowna\'s Top Parks

Top Attraction for the One Hour Experience

Who was Rembler Paul? He was a generous, strong, confident character who was concerned with the humane treatment of animals. An eccentric, a cunning entrepreneur, an adventurous soul, a pioneer, a practised disciplinarian and was a good Conservative. Rembler Paul was a man who cared about his family.

As I grew up, my mother enjoyed relating to us kids all of the family history. While her side of the family was keenly interesting, my dad’s side held the intrigue. (My Dad was Bernard George Paul). My older brother and I had the opportunity as young teens to go on a camping vacation with our Grandma and our Uncle (circa 1965), and one of the stops in British Columbia was to see the Paul Tomb. Our great, great grandfather, Rembler and his wife, Elizabeth were buried there, and we could not wait to embark on this adventure. Family lore suggested that the eldest son of each generation could be buried there, thus setting my brother Barrie up for many occasions of taunting sibling rivalry. My mom also told us that the family cat was buried with Elizabeth.  ** read more**

$325.00 for the first 4 passengers and $25.00 per person thereafter, a maximum of 8 passengers. Note; Serendipity is equipped with a kitchenette, bathroom, and a bed, therefore allowing the legal consumption of personal liquor (providing you are of age).…

ALL INCLUSIVE! South East Kelowna Route. This area accounts for the some of the oldest vineyards in the valley, as well as some of the most interesting ones. Scenic trails, spectacular views of the lake and the grandeur and creativity of…

LET’S GET WILD! This a BIG towable with a large, deep center crew cockpit for up to three riders and an outside deck radius that can fit at least 2 riders. The cockpit is deep enough to stand in and is…

Three Hour Private Experience Three Hour – Your personal Private Charter The specifics; Times -On the hour, every hour based on availability. You can see and choose available times when booking your reservation. Capacity – First 4 passengers included to the max of 8,…

LIMITED TIME – $50.00 FUEL CREDIT! Our “TOP TIER” tour! Our best selling experience is the Half Day Charter, up to 4 hours on the water, choice of water activities, and choice of regions to explore! It’s your day and…

Want to take the whole family fishing and also experience the comfort and luxury of Serendipity?  We offer fishing in comfort and style, hang out and cruise along and try to catch dinner for the evening.  Okanagan Luxury Lake Tours…

TWO TIMES THE FUN! This a BIG towable has a large center area for up to 8 people to lounge on as a floating Island. What makes this towable so unique is it doubles as a 5 rider towable to step… 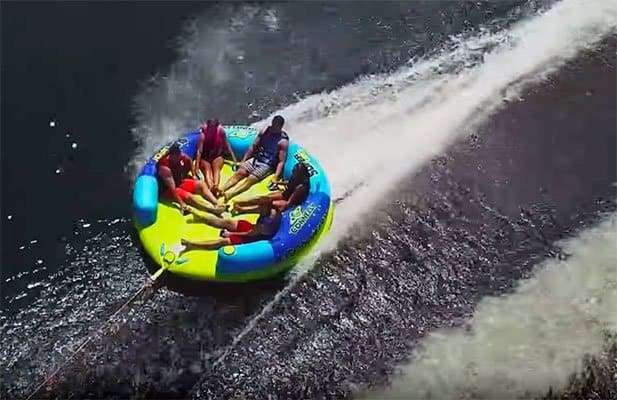 LAUNCHING YOU INTO A NEW ERA OF FUN! This a HUGE towable with a large center deck can hold up to 6 riders that all face each other while sitting down and in against a well built back support with multiple…

THIS IS AN ALL INCLUSIVE PACKAGE!!! Getting Married?  If your plans are in Kelowna, then the obvious place to hold it is what the Okanagan is known for, the lake! With our boat being one of the ONLY LEGAL boats…

Grab some air! We love the water, and we love to have fun on it, and we want to share this experience with you and your friends or family. This incredible package is good for up to 6 persons, includes…

ALL INCLUSIVE! Lake Country’s Scenic Sip. Heading north towards Lake Country you will experience some of the most unparalleled views of the Okanagan Lake and the acres of vineyards that cover the area. Lunch at the Oak and Cru the Delta Grand…

ALL INCLUSIVE! WESTSIDE WINE TRAIL The Westside Wine Trail is home to some of the oldest and most established vineyards in the Okanagan Valley. The panoramic views this area offers add to the awe inspiring feeling when you visit each winery. With…

Three’s Company! The Rock n Tow Lazy Boy Luxury Lake Tours ROCK N’ TOW is a tube and recliner in one! Lay back and hang on, because the curved deck delivers a wild ride. Enjoy the rocking action as the…

LET’S GET WILD! This a BIG towable with a large, deep center crew cockpit for up to two riders and an outside deck radius that can fit at least 3 riders. The cockpit is deep enough to stand in and is for…

Three’s Company! The Rock n Tow Lazy Boy Luxury Lake Tours ROCK N’ TOW is a tube and recliner in one! Lay back and hang on, because the curved deck delivers a wild ride. Enjoy the rocking action as the…

We teach you the steps to progress from your first ride on a wakeboard to your first jumps off the wakes Learning to wakeboard, everyone is doing it, its fun, its healthy and you are with friends and you are…